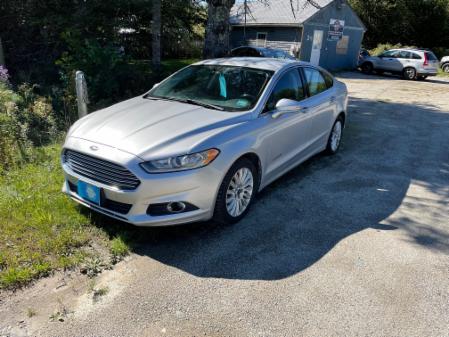 This is a really nice running Ford Fusion Hybrid with a tale of woe.

We had it out for sale earlier this year. We did brakes and some other minor maintenance to the car. Everything checked out. Then, one day the 12v battery went flat. It was out cold, so we put the battery on the charger for the day, and it started right up before we closed at the end of the day.

But the next morning, same thing. Stone cold flat battery.

At this point we replaced the 12v with a new, larger battery.

We then discovered a rather large standby draw on the battery.

All of the mechanics we normally work with have looked at it. We found the offending circuit and removed the fuse.

Car runs fine, but has lights on the dash because that fuse runs several things.

We are selling AS IS and are not going any further with it. It is not inspectable as it is right now and MUST be towed off our lot.

No temporary plates and, no, we will not fix it for you for any cost. This is your deal and project.

We are just trying to clear the lot of Tom's unfinished projects before the snow flies.

As is, no warranty, just a great deal.